The parish of Haccombe-with-Combe, in the district of Teignbridge, is a friendly, thriving community situated on the banks of the River Teign in south Devon. It benefits from the picturesque beaches of the English Channel to the east and the dramatic stretches of Dartmoor to the west.

The parish is made up of Combeinteignhead village and the hamlets Haccombe, Netherton, Lower Netherton and Buckland Barton, as well as encompassing areas in Milber and Buckland on the outskirts of Newton Abbot.  It is a friendly and thriving community which has grown in recent years with 775 residents registered to vote in 2019.

Much of the parish is designated as an Area of Outstanding Natural Beauty and is within the Coastal Preservation Area. Combeinteignhead itself is a conservation area and is home to many of the listed properties in the parish.

There are plenty of ways to enjoy Haccombe-with-Combe and something to suit most interests – from rambling walks along the ancient paths, sailing on the river or simply sitting and enjoying the view from our pubs.

Combeinteignhead is mentioned in the Doomsday Book as a district which contained 13 manors in an area which totalled ten hides (a Hide is an area of about 15-20 hectares). It was known therefore as “Ten Hides”, and it was this, not its proximity to the River Teign, which gave the village its name. A Combe is a steep sided valley, and so the name Combeinteignhead literally means “Combe in Ten Hides”.

The village itself is long and narrow, nestled in the base of the valley, strongly suggesting that it was a medieval agricultural settlement which spread out from an ancient core in the south of the village (the site of the ancient All Saints Church). Because the steep slopes of the valley made for difficult arable farming, it is likely that high population growth, combined with two decades of poor harvests in the 1330s and 1340s, forced farmers to tackle the less than ideal farming conditions in order to feed its population.

When the Black Death decimated the country in 1348-49 farmers were able to find easier land to work, and the village was all but abandoned until the end of the 15th century, despite further work on the church in this time. At the beginning of the 16th century, there was further investment in the village in the form of new buildings and, other than the red sandstone almshouses built in 1620 by William Bourchin, the architecture of the south of the village remains largely unchanged since that time. 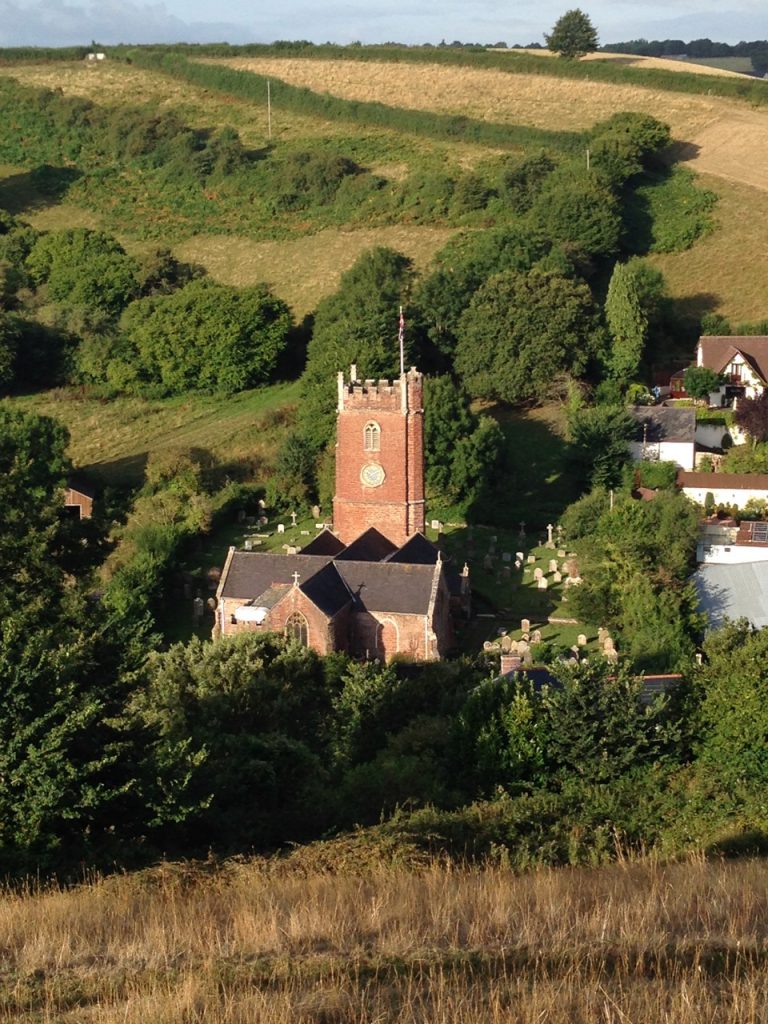 The core of the village was the ancient All Saints Church, the first historical record of which was in 1259 when Bishop Bronescombe dedicated two alters.  The following century was a period of significant growth for the village. The dedication of the High Altar in 1339 by the Bishop of Waterford would likely have formed part of the regeneration of Combeinteignhead at that time. Prior to the Reformation, the church was originally dedicated to the Virgin Mary and, following the Reformation, the dedication of the church was, to official records at least, forgotten.  It was dedicated to All Saints in 1986. The exterior of the church remains largely unchanged since the 15th century but was restored in the 1880s in distinctive Arts and Crafts Style, though it retains its 12th century font.

Historically, Haccombe-with-Coombe formed part of Wonford Hundred. It falls within Moretonhampstead Deanery for ecclesiastical purposes. The Deaneries are used to arranging the typescript Church Notes of B.F.Cresswell which are held in the Westcountry Studies Library.